Cobos is a product composed of two main parts:
– a set of Eclipse plugins as the client side
– a set of scripts on the Mainframe server – yes, you have noticed that there is no Cobos server, simplifying the installation on any mainframe.

Since the very beginning of the project, we have decided to give our users the opportunity to upgrade client and server independently, to deploy the client upgrades without constraints, to validate a new server version quietly, or simply to put it online for a few well chosen users, etc …

Well, we rely on what is known as backward compatibility – a well-known concept by our IBM friends when they designed the mainframe architecture in the 60’s 🙂

In fact, we have to deal with this concept when we are developing a new version. I know developers who have made brain knots with that, lol.

Still, it is not that complicated, but we just have to be careful.

For Cobos, we made a choice based on the following simple (but binding) principles:
– we support 2 major versions (current version and previous version).
– we guarantee that the current version will be supported by the next version (I do repeat exactly the previous sentence but it is better if it is written).
– there are no changes in application protocol during the life of a major version, our APIs must therefore be well designed to be as stable as possible but it is for another story. 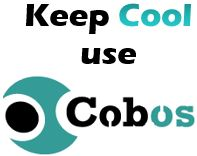